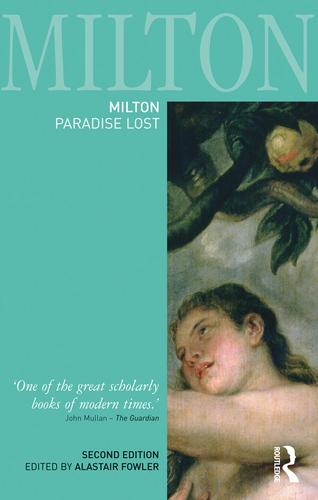 Milton's Paradise Lost is one of the great works of literature, of any time and in any language. Marked by Milton's characteristic erudition it is a work epic both in scale and, notoriously, in ambition. For nearly 350 years it has held generation upon generation of scholars, students and readers in rapt attention and its profound influence can be seen in almost every corner of Western culture. First published in 1968, with John Carey's Complete Shorter Poems, Alastair Fowler's Paradise Lost is widely acknowledged to be the most authoritative edition of this compelling work.
An unprecedented amount of detailed annotation accompanies the full text of the first (1667) edition, providing a wealth of contextual information to enrich and enhance the reader's experience. Notes on composition and context are combined with a clear explication of the multitude allusions Milton called to the poem's aid. The notes also summarise and illuminate the vast body of critical attention the poem has attracted, synthesizing the ancient and the modern to provide a comprehensive account both of the poem's development and its reception. Meanwhile, Alastair Fowler's invigorating introduction surveys the whole poem and looks in detail at such matters as Milton's theology, metrical structure and, most valuably, his complex and imaginary astronomy. The result is an enduring landmark in the field of Milton scholarship and an invaluable guide for readers of all levels.