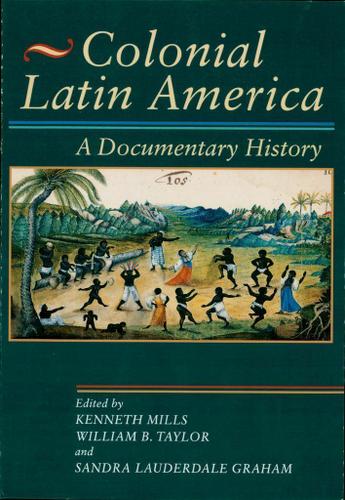 Colonial Latin America: A Documentary History is a sourcebook of primary texts and images intended for students and teachers as well as for scholars and general readers. The book centers upon people-people from different parts of the world who came together to form societies by chance and by design in the years after 1492. This text is designed to encourage a detailed exploration of the cultural development of colonial Latin America through a wide variety of documents and visual materials, most of which have been translated and presented originally for this collection. Colonial Latin America: A Documentary History is a revision of SR Books' popular Colonial Spanish America. The new edition welcomes a third co-editor and, most significantly, embraces Portuguese and Brazilian materials. Other fundamental changes include new documents from Spanish South America, the addition of some key color images, plus six reference maps, and a decision to concentrate entirely upon primary sources. The book is meant to enrich, not repeat, the work of existing texts on this period, and its use of primary sources to focus upon people makes it stand out from other books that have concentrated on the political and economic aspects. The book's illustrations and documents are accompanied by introductions which provide context and invite discussion. These sources feature social changes, puzzling developments, and the experience of living in Spanish and Portuguese American colonial societies. Religion and society are the integral themes of Colonial Latin America. Religion becomes the nexus for much of what has been treated as political, social, economic, and cultural history during this period. Society is just as inclusive, allowing students to meet a variety of individuals-not faceless social groups. While some familiar names and voices are included-conquerors, chroniclers, sculptors, and preachers-other, far less familiar points of view complement and complicate the better-known narratives of this history. In treating Iberia and America, before as well as after their meeting, apparent contradictions emerge as opportunities for understanding; different perspectives become prompts for wider discussion. Other themes include exploration and contact; religious and cultural change; slavery and society, miscegenation, and the formation, consolidation, reform, and collapse of colonial institutions of government and the Church, as well as accompanying changes in economies and labor. This sourcebook allows students and teachers to consider the thoughts and actions of a wide range of people who were making choices and decisions, pursuing ideals, misperceiving each other, experiencing disenchantment, absorbing new pressures, breaking rules as well as following them, and employing strategies of survival which might involve both reconciliation and opposition. Colonial Latin America: A Documentary History has been assembled with teaching and class discussion in mind. The book will be an excellent tool for Latin American history survey courses and for seminars on the colonial period.